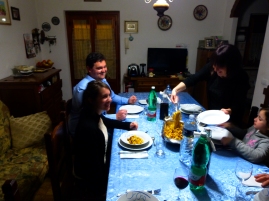 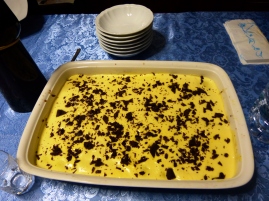 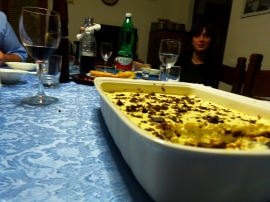 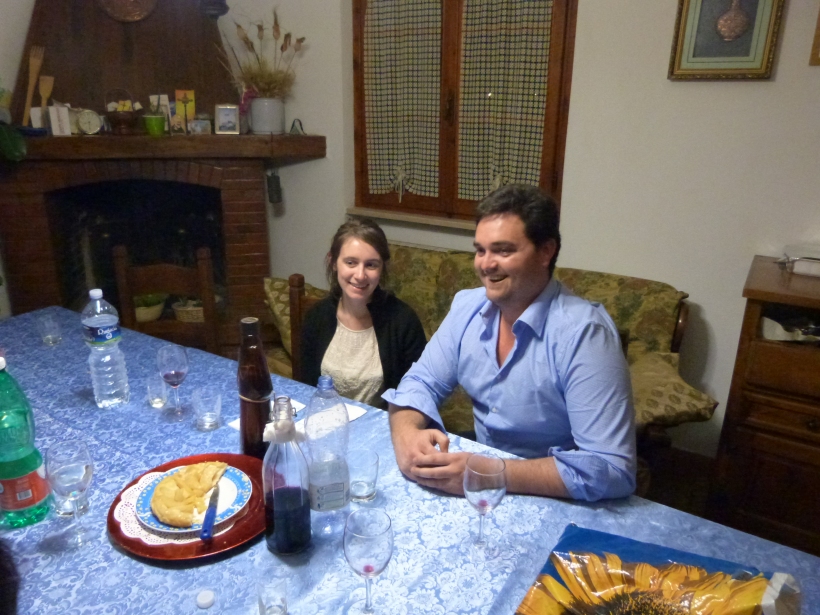 Guess who came to dinner?

Last Saturday evening , on 22th march 2014, we offered a traditional Tuscan dinner to our guests of the Cappannelle Holiday House from Montpellier (France), a young couple very friendly and kind.

Every time is like to do a little trip in world. It’s a big opportunity to speak about the life of our guests and know their culture as well as our life in Tuscany

Marusca (my wife) and Graziella my mom) prepared a tuscan dinner for them. The menù was simple but at the same time amazing:

Chianti Wine made from my Dad Renato and an italian coffee!!

……..but the real surprise was the gift of our guests …. infact they prepared a wonderful Tarte Tatin for eating together…….

And only in this moment we knew of the story of the sisters Tatin that for a mistake they invented one of the most famous french cakes.

The Tarte Tatin is a classic sweet French tradition was born at the beginning of the century, thanks to the inventiveness of his sisters Caroline and Stephanie Tatin albergatrici to Loret -Cher , France.

In fact it seems that , as usually happens , this delicious cake is born because (it would be better to say thanks ) of a mistake.
The two Tatin sisters , they had two different roles in the hotel , while the young Carolina was responsible for welcoming customers , Stephanie , cook, took care of the kitchen : Particularly appreciated was his delicious apple pie.
Legend has it that , on a day when the hotel was full of hunters who were waiting to have lunch , Stephanie noticed that you have not prepared her apple pie , without panicking ran into the kitchen , buttered and sprinkled with sugar a pan , put us in apples and it baked . Only after he realized he had not lined the pan with the pasta brisa ! Once again Stephanie took the situation in hand , covered the pan with a single layer of dough and put it in the oven . The story ends , of course, with a happy ending : in fact finished cooking , Stephanie threw the cake on a plate and brought it in the room where he was literally devoured . She was born as the tarte tatin . Subsequently , since the discrete success , the tarte tatin was adopted by the famous Parisian restaurant Maxim ‘s, which made ​​it one of its strong points . Today it is one of the most popular desserts in France and is inevitable in Brasseries and restaurants , from the most modest to the most luxurious .